An interesting alternative to working in the private sector is a career in government. Many highly responsible aviation positions are to be found in the FAA and other Federal agencies. In addition, state and local government agencies are involved in aviation.

Among its many functions in aviation, the FAA is responsible for controlling the movement of aircraft throughout the nation, establishing and maintaining electronic navigation aids, licensing pilots and aircraft mechanics, and certifying the airworthiness of aircraft.

Civil aviation careers in the Federal Government for men and women are found within the Department of Transportation, Federal Aviation Administration; the Civil Aeronautics Board; and a growing number of other Federal departments and agencies. All of these aviation jobs come under the Federal Civil Service, and wage scales are determined by Congress, which, from time to time, adjusts the pay levels to bring them in line with comparable jobs in private business and industry. Salaries for Federal Civil Service employees are established into two chief categories: General Schedule (for those employees who perform administrative, managerial, technical, clerical and professional jobs and who are paid on an annual basis) and the Federal Wage System (for those employees who perform jobs associated with the trades and crafts and who are paid wages on an hourly basis).

Most Federal Civil Service employees in the aviation field are covered by the General Schedule and their salaries vary according to their grade level (GS-1 through GS-18). Within each of the grades provided in the General Schedule, provision is made for periodic pay increases based on an acceptable level of performance. With an acceptable level of competence, the waiting period of advancement to steps two, three and four is one year, steps five, six and seven is two years, steps eight, nine and ten is three years.

Forty hours constitutes a normal work-week. Additional payment (called premium pay) is made for shift work involving duty between 6 o'clock p.m. and 6 o'clock a.m. and for work during Sundays and holidays. Merit promotions are awarded under provisions of a Civil Service approved merit promotion plan.

Most federal employees under Civil Service participate in a liberal retirement plan. Employees earn from 13 to 26 days of paid annual vacation, depending upon the length of service, and 13 days of paid sick leave each year. Health insurance, low-cost group life insurance, credit union service, and compensation and medical care for injury on the job are other benefits offered.

The largest number of aviation jobs found within the Federal Government (outside the Department of Defense) is with the Federal Aviation Administration (FAA) of the Department of Transportation. The FAA, with a total of approximately 47,000 employees, is charged with the administration and enforcement of all federal air regulations to insure the safety of air transportation. The FAA also promotes, guides and assists the development of a national system of civil airports. The FAA provides pilots with flight information and air traffic control services from flight planning to landing.

Primary duties include: evaluating mechanics and repair facilities for initial certification and continuing adequacy, evaluating mechanics training programs, 3.inspecting aircraft and related systems for airworthiness, and 4.evaluating the maintenance aspects of programs of air carriers and other commercial operators including the adequacy of maintenance facilities, equipment and procedures, the competence of personnel, the adequacy of the program or schedule for periodic maintenance and overhauls, and the airworthiness of aircraft.

Examples of qualifying experience are:

Experience involving technical supervision or management of the maintenance and repair of aircraft, aircraft engines, or aircraft electronics communication and navigation systems and equipment of aircraft with responsibility for airworthiness following federal aviation or military regulations and safety standards. This experience must demonstrate a broad and comprehensive knowledge of maintenance of aircraft or aircraft systems. It must also demonstrate an ability to gain cooperation at management levels in complying with and supporting proper maintenance standards. Aviation safety inspector or air safety investigator concerned with aircraft powerplants, structures or systems. Experience gained as a field service representative of a manufacturer of aircraft systems and equipment may be accepted up to a maximum of one year.

Candidates for position at GS-9 and above are required to have knowledge and skill in the maintenance of aircraft (except positions that involve primarily avionics equipment) must hold an FAA Mechanic Certificate with airframe and powerplant ratings.

Married and unmarried men and women, with or without children are eligible. Persons who are widowed or divorced, also are eligible.

It is the policy of most aviation companies to provide equal employment opportunity to all individuals regardless of their race, creed, color, religion, sex, age, national origin, disability, military and veteran status, sexual orientation, marital status, or any other characteristic protected by state or federal law. Most aviation companies are strongly committed to this policy, and believe in the concept and spirit of the United States law.

Most aviation companies are committed to assuring that:

All recruiting, hiring, training, promotion, compensation, and other employment related programs are provided fairly to all persons on an equal opportunity basis without regard to race, creed, color, religion, sex, age, national origin, disability, military and veteran status, sexual orientation, marital status or any other characteristic protected by law;

Employment decisions are based on the principles of equal opportunity and affirmative action;

All personnel actions such as compensation, benefits, transfers, training, and participation in social and recreational programs are administered without regard to race, creed, color, sex, age, national origin, disability, military and veteran status, sexual orientation, marital status or any other characteristic protected by law, and;

Employees and applicants will not be subjected to harassment, intimidation, threats, coercion or discrimination because they have exercised any right protected by law.

The Office of Special Counsel (OSC) and the Merit Systems Protection Board (MSPB) enforce the prohibitions against federal employment discrimination codified in the CSRA. The OSC will defer those bases of discrimination under EEOC's jurisdiction to the respective federal agency and its EEO process. The CSRA also prohibits employment discrimination in the federal government based on marital status, political affiliation and conduct which does not adversely affect the performance of the employee, none of which are within EEOC's jurisdiction. Moreover, the law defines ten other prohibited personnel practices in the federal government, all of which fall under the jurisdiction of the OSC and the MSPB. See Prohibited Personnel Practices at http://www.osc.gov/ppp.htm.

Additional information may also be found on the the EEOC web site located at http://www.eeoc.gov/

Most Federal Civil Service employees in the aviation field are covered by the General Schedule and their salaries vary according to their grade level (GS-1 through GS-18). Within each of the grades provided in the General Schedule, provision is made for periodic pay increases based on an acceptable level of performance. With an acceptable level of competence, the waiting period of advancement to steps two, three and four is one year, steps five, six and seven is two years, steps eight, nine and ten is three years. Trainees are paid while learning their jobs.

Salaries and benefits can vary. For an updated look at salaries in the aviation industry, view the Avjobs.com Salary Report.

Where the jobs are and who hires

Outstanding inspectors may be promoted to the next higher level with increased responsibilities and salary. An inspector demonstrating managerial ability may become a section or branch chief. She or he may also become an instructor at the FAA Academy.

Outlook for the Future

The aviation industry has gone through periods of tremendous success and innovation, and periods of intense challenges. Today, aviation plays a critical role in our economy and the future of aviation will depend on business and personal travel, aviation fuel costs, and government subsidy and intervention.

Avjobs.com is the premier resource for your career in the aviation and aerospace industry. More aviation companies use Avjobs.com than any other service. Our system is updated daily with the latest job openings. View our latest system statistics in 13 job categories.Whether you are changing jobs or changing careers, you have come to the right place. Your future in aviation can be found at Avjobs.com!

Basic training as an aircraft mechanic or in electronics and communications systems repair in a technical or vocational school is a starting point. College level work in aeronautical engineering or aeronautical maintenance or electrical or electronic engineering is preferred. From time to time, retraining is required as new developments in aircraft, engines and equipment appear. 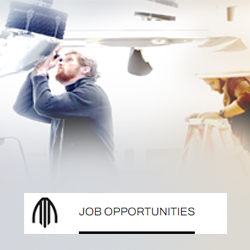